ANGLER BEWARE: THESE BONEFISH WILL TEAR YOUR TIPPET APART.

The fun began a little earlier than expected. We pulled off the overseas highway and slowly approached the Sugarloaf Key ramp. Suddenly the jeep went into convulsions and coughed us to a dead stop. The little red needle was pointing to E, and while that usually stands for EXCELLENT in my book, this time it meant OUT OF GAS! Luckily for us, we were lauching at the local KOA campground, and the gas pump was 100 feet us. A few minutes delay and we were back in business at the launch site. T-minus 15 minutes to the flats, and counting!

Jim hadn’t done much of any bonefishing before. He’d been fishing and hunting in Montana for years, and had just begun to fish saltwater. He had the enthusiasm of a teen and the fishing saavy of an osprey. He was no less anxious as we launched “FlatsMaster”. I looked at my watch as we idled out of the ramp area, 6:25 p.m., and thought outloud “we’ve got about an hour before low tide”.

“Is that good?” Jim was one of those anglers who had to know everything that was going on. He inquired like a dried Key West sponge, eager to soak up all the juicy information he could about flats fishing. “Could be, we’ll see.” The action craft smoothly reached full plane in seconds as the big johnson 115 hummed us along mangrove isles and shoreward creeks.

As we jetted Northeast toward the flats, I explained to Jim how the tides work. “We’ve got to have low falling water or low rising water on a few of these flats. On others it’s the opposite, you want high rising or high falling. None of the flats are the same. The tides on the gulf side are from two to six hours later than the Atlantic side, and around here we use the Key West tides as our basis for correction. These particular Sugarloaf flats are about three or four hours late on the low tide and about four or five hours late on the high tide.”

“Have there been many bonefish around lately?” Jim bellowed above the rumble of the outboard. There had been tailing bones everywhere and he was chomping at the bit to catch one. “What fly will they take?” On impulse, I reached for my fly box in my pocket, grabbed an olive and brown Sugarloaf Special and handed it to him with a grin. “Looks sort of like cross between a clouser and a charlie,” Jim said as he tied it on using a palomar knot. 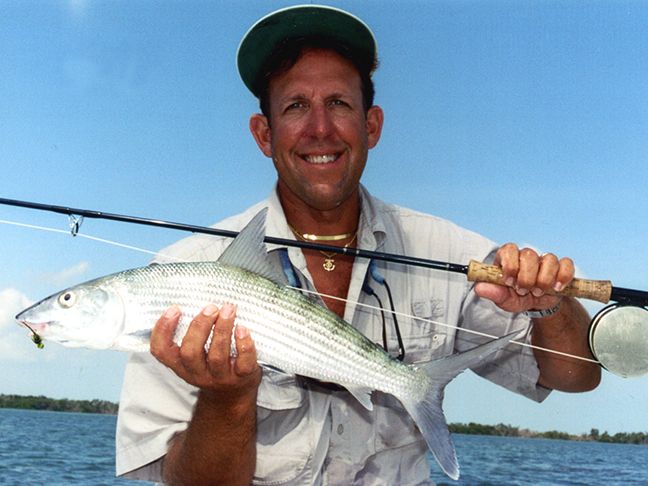 I staked out “FlatsMaster” at the usual spot on the edge of the flat so we would have enough water to exit comfortably, even at dead low tide. The current conditions were perfect. A gentle southeast breeze at our backs, water temp about 84, sun beginning to set, and enough of a low falling tide to get the fish moving in our direction. We quickly stepped into our wading shoes, grabbed our fly boxes, extra tippet, pliers, and cameras. Quickly scanning the horizon for any Bonefish sign, I motioned to Jim, “Let’s go get-em!”

We quietly slipped off the skiff into the shallows and began walking the flat toward the northwest. I showed Jim how to shuffle his feet along the turtle grass and sand bottom. He asked why this was necessary, and I told him the story of the impaling sting ray. “They can put a world of hurt on ya!” We slowly shuffled into shallower water, scanning constantly for wakes or glistening tails in the distance. It was a little slow. Cormorants, herons, rays, small sharks, barracudas and baitfish were feeding here and there on the flat, but no Bonefish…yet.

The tide slowed and was almost low when I saw a wake of fish in the distance. “Look! Fish about 100 yards directly under the setting sun moving this way”, Jim stared in the direction of the red ball and grinned. The wake was obviously a school of fish moving in shallow water. Tails were glistening in the mauve sunset light.

I really wanted Jim to hook up with one of these fish. I had hooked many in the past and I knew we might only get one or two good shots. “O.K., now we want to gradually move in the direction of the fish, heading them off at the pass. The key is to try to anticipate their path across the flat.” We paused and admired the big Bones as they ambled their way toward us like teenagers on a scavenger hunt. Starting and stopping along the way to tip their nose down and dig out snapping shrimp and crab, these Bones were hungry.

They were now less that 50 yards from us. “Judging by the size of the tails, I’d say these fish are somewhere in the 10 to 15 pound range,” my voice had lowered to almost a whisper. “We should stay still, unless the fish change course.” We were about 20 feet apart watching the school feed toward us. The gurgles, pops and and swashes of feeding Bones is beautiful music to a bonefisher’s ear. As they came closer the symphony of their each and every move grew in intensity. Now only about 30 yards away, and still headed right for our position. 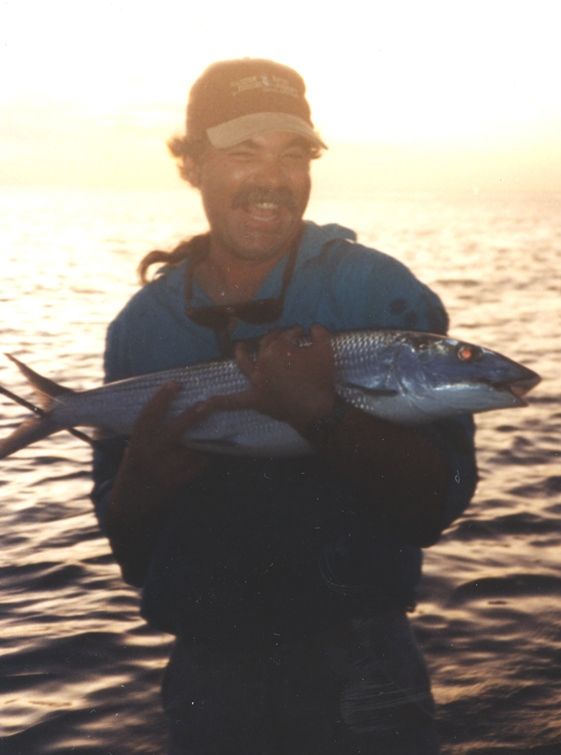 Then, out of nowhere a small pod of two or three Bones appeared to our left within 50 feet. Instinctively, without thinking about my buddy Jim, I cast in front of the lead fish, my fly landing within 18 inches of him. I twitched the fly three or four inches several times without a take. Then I remembered Jim, and I glanced to my right. He was looking at the main school as they busted apart, chased by a menacing black tip shark. The thrashing and splashing of a busting school of Bonefish is anguished, frenetic noise.

I motioned to Jim to quickly come up to my side. The small pod of Bones to my left were still feeding within 50 feet of me and were not spooked by the slam dancing going on nearby. Jim shuffled quietly and arrived at my side within a minute. I pointed to the pod of fish, now within 40 feet of our stance. He made a text book cast, his Sugarloaf Special landing about a foot in front of the lead Bone. One quick strip, a swirl, and Jim’s line came tight. The pod exploded as Jim raised his rod to a bow. “YES!”

The first burst of power from the bonefish took Jim by surprise and nearly coiled the extra fly line around his neck. He quickly recovered however, and scrambled to clear the extra fly line to the reel. What seemed like an eternity took only seconds, as the fish ran at least two hundred yards across the flat, maybe two-fifty, before slowing down.

I privately assured myself that I had loaded 300 yards of backing on that reel. Jim was gaining a little ground, when the flats buster took off for the races again, ripping at least another fifty yards off in seconds. “Big fish, Jim, you might want to turn that drag down a notch or two, or palm the reel a little next time he runs.” I was also a little concerned about the shark. I had had three hooked Bones eaten in rapid succession last week, and I didn’t want another to fall victim to Mr. Black Tip.

Fifteen minutes and two more runs later, Jim had the Big Bone swimming in circles ten feet in front of us. I was busy taking pictures of his first Bonefish as he carefully handled the prized catch. We thought the fish to be about 12 or 13 pounds, judging by its length and girth. A huge Bone, steel plated with silver scales, a white belly and deep grayish-green bands across its back. We admired the massive beauty of the fish, keeping him wet in the foot deep turtle grass flat. And as we released him we both spoke of the Bone to be as tough (or tougher) a fighter as any steelhead in any river. “Bones of Steel aren’t they?”. Jim just chuckled in agreement.

The sky was now purple and grey with the fading sunset.We looked around for another minute or two, but no more tails or wakes could be seen in the dusk. We high-fived it back to the skiff and made our way home in the starlight recalling the awesome power of the great grey ghost.