Blue Heaven rendezvous at 6:30 a.m. This slice of Key West’s Bahama Village is waking to roosters, disturbed only by our chowing down fresh conch and eggs. Jimmy’s music ebbs and flows from the kitchen, “…where the green of the Gulf meets the blue of the sea…” and helps me make up my mind.

“The Marquesas are our best shot,” I announce. “We’ve been seeing packs and singles all week out there, and the conditions are right. With a slack tide and 10 knots of southeast wind it’ll take us about 40 minutes to run from the bight.” Everyone nodded in agreement, and the three of us hurry off to the ramp while the dusk evaporates into dawn. 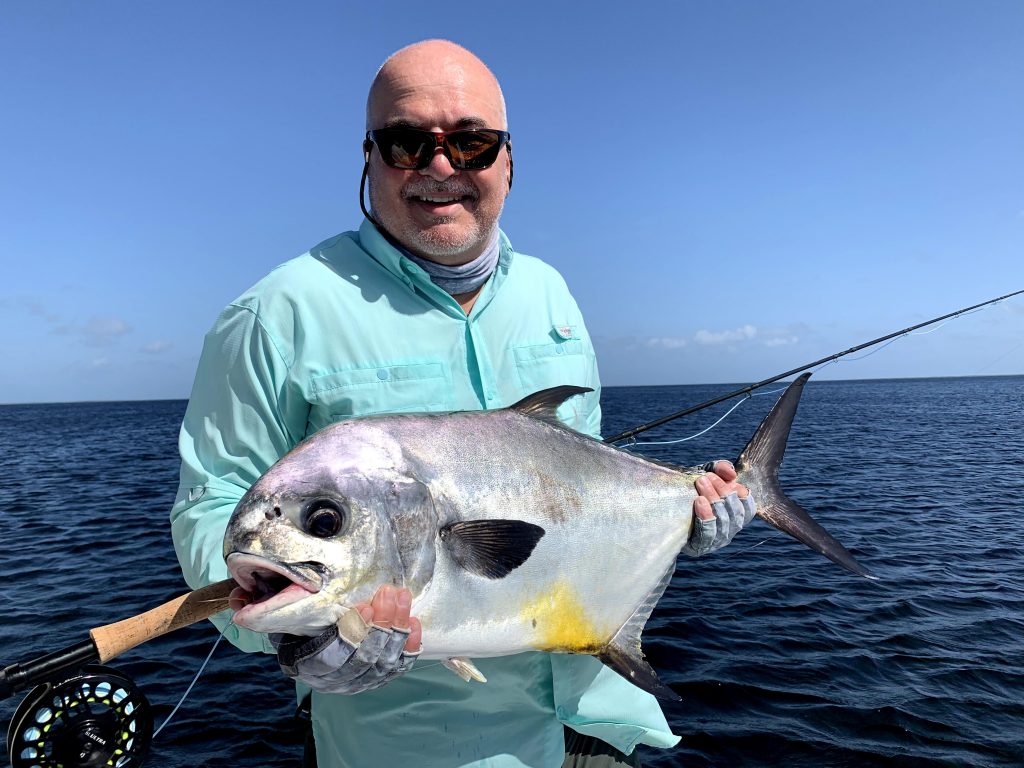 The sunrise casts a bronze sheet of glass onto Man of War Harbor as I throttle FlatsMaster up to planing speed. Dave’s facial expression is quizzical, almost thinking out loud, and I am reading his thoughts…”Here I am at long last headed out to fish Key West. Months of anticipation have led to this sojourn after Permit, the most challenging fish on the long rod. Will I be up to the task? Will the Great Pompano take my crab fly? Or will he spook from the sight of yarn and feathers? If I do hook up, will I be up to the angling task enough to land Mr. Permit or will he get the best of me and break me off on a coral rock?”

We pass the Mullet Keys, twenty minutes or so from the Marquesa atoll. Our tackle is primed and ready for battle. Sage RPLX 9 and 10 weights with Billy Pate reels loaded with floating lines and flourocarbon tippets. The freshly tied leaders and knots have been triple checked for strength and integrity.

Our ammunition is the latest in Permit fly technology, hot off the vise. “FlatsMaster Crabs”, tied with tan and brown rug yarn, silly legs, marabou and cree feather tails, a hint of flash, a weed guard and a painted chartreuse and black large dumbbell head. These nickel to quarter-size imposters will dive to the bottom in a frenzy of wiggles, enticing our prey to stop for a snack. With any luck, the Permit will see the fly clawing its way into the grass and sand, mistake it for the real McCoy, then gobble it up off the bottom. 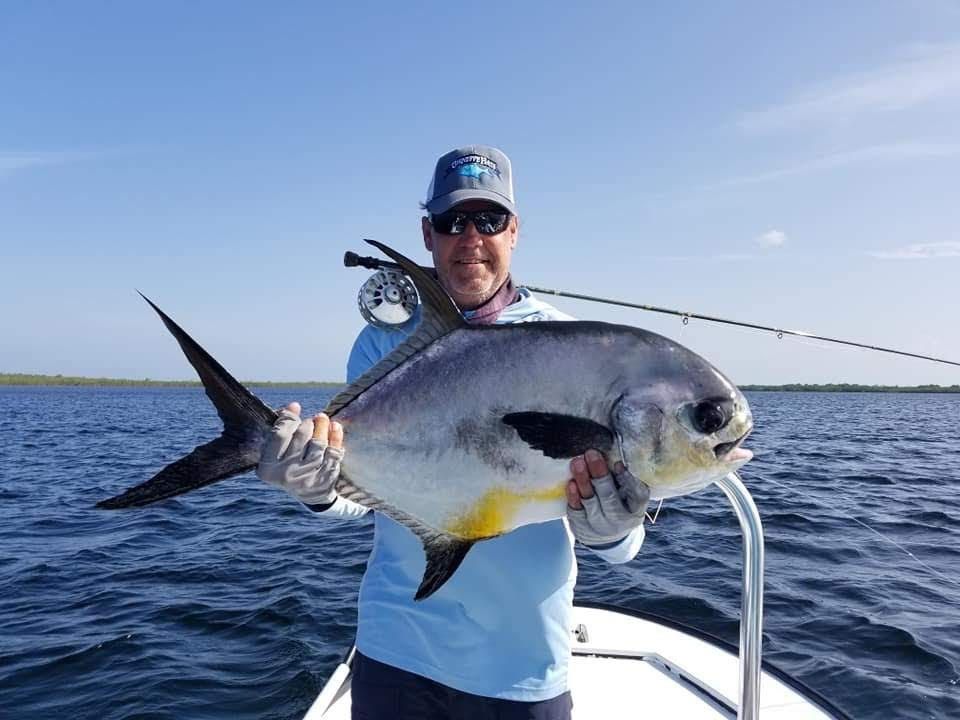 As we approach the Southeast flats of Marquesa, I am reminded of last night’s strategy session at Turtle Kraals. “I’ll call out the clock position and distance in feet to the fish. When the Permit is within your range, cast the fly so it lands a foot or two in front of him or upcurrent of him. Reacting quickly with your cast is essential, as it takes only a few seconds to spook the fish or to lose your shot. So, try to limit yourself to one false cast at the most.”

“Your presentation should allow the fly to dive to the bottom. Lower your rod tip into the water and strip your slack line constantly so you can feel the fish when he eats your fly. Do not strip the line to move the fly unless you need to get the Permit’s attention. If so, then make the fly move by twitching the rod, or by stripping ever so slightly. The natural crab will try to dig into the bottom, so you are attempting to imitate that type of movement. If the fish swirls on your fly, then he is smacking his rubber lips, so be ready! If he picks it up, then you’ll feel your line stiffen. You then gradually strip-set the hook, coming tight with your line and the fish. Slowly raise your rod angle when you feel the fish start to run. As he makes his initial run and you are clearing line to your reel, gently pump the rod sideways several times in the opposite direction from the fish’s run to lodge the hook in the Permit’s mouth.” Motivated by the spirit of Hemingway and our discussion of angling techniques, we toasted Key West Lager like it was the nectar of the Permit gods.

I quickly review the finer points of our angling strategy with Dave and Ron, as FlatsMaster drifts with the tidal current. The hunt has begun on the South Marquesa flats as the tide visibly falls in streams of ripples, mangrove leaves, and weed. It is pulling FlatsMaster out to water that is 2-4 feet deep. Knowing that this high falling tide is ideal, I begin to pole West, zig-zagging my way from zone to zone. Dave is on the bow in the ready position, warming up his double haul. He can cast at least 70 feet quickly with the necessary accuracy. This opportunistic fly-rodder would not lose any shots today! 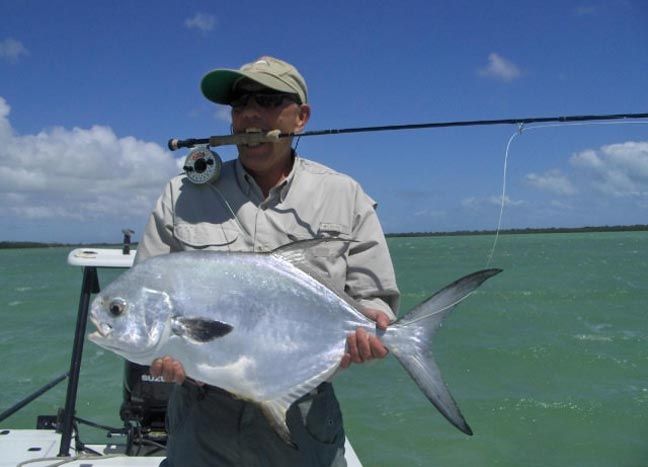 An hour passes without a Permit in sight. A few bonnet sharks, nurse sharks, and sting rays are seen patrolling the edges, giving us target practice. We are approaching some “Permit Bunkers” – white sand pot-holes several feet or yards in diameter – where Permit often hold to catch unwitting crabs drifting or crawling by in the current. Adjacent to these pot-holes are turtle grass and mud beds housing zillions of crabs, shrimp, worms, minnows and other Permit delicacies. The sickle tail Permit often root out their quarry in shallow water by sticking their face and mouth into the grass and mud. Many times the Permit will be seen “tailing” while feeding in this manner, using the forked tail as leverage to hold the fish in one position while the crab is dug out of the marl.

We are like guards at watch over Ft. Jefferson, our combined visual energies scan the flats for the approaching armada of fish… suddenly, without warning there is a glistening flash – – no three flashes…

“Permit, eleven o’clock, sixty feet on the grass. Three of them. See the tails?” I ask as the tailing fish are feeding on the edge of the shallow flat in about 2-3 feet of water. “O.K. they’re moving to ten o’clock now into deeper water, about 50 feet from us. Cast now Dave, about forty feet at ten o’clock, they are headed slowly right at us.” 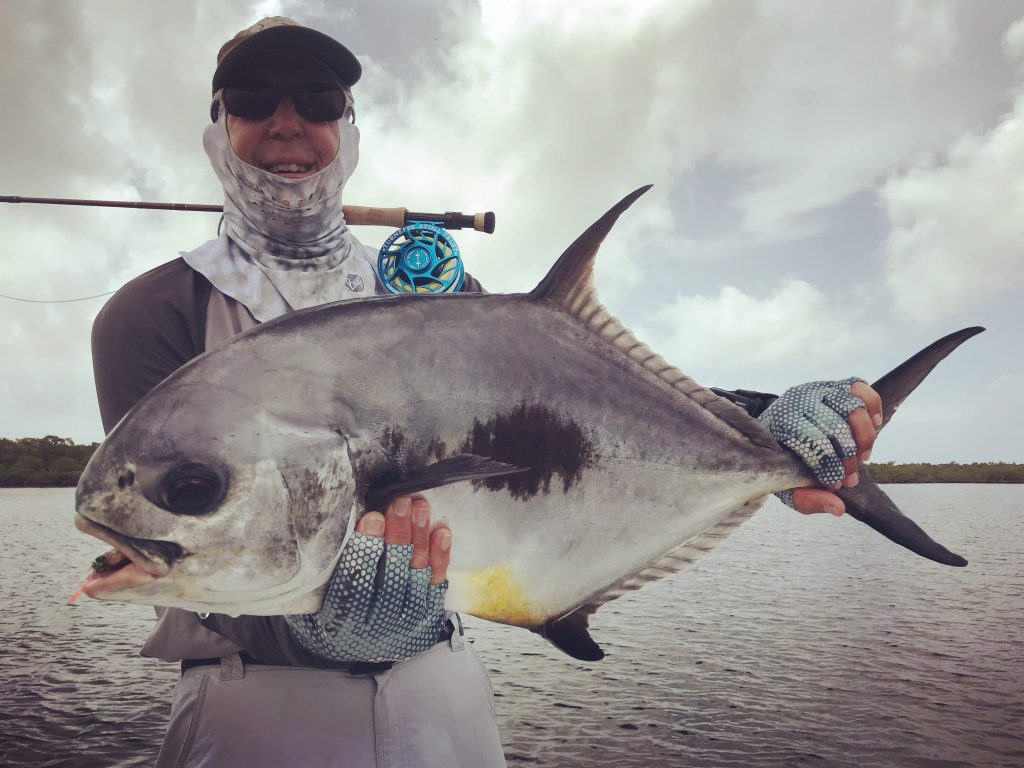 “I’ve got him!” Dave yells as his line comes tight and starts ripping through the water as the Permit begins his initial burst. “Now pump your rod up and clear to your reel!” I exclaim as Dave stumbles on the bow in excitement.

Every serious saltwater fly rodder dreams of this moment – that first hook up with a Permit. “Clear your line now, but be ready to let him run and watch out for your knuckles! There he goes, headed for the channel. Not to worry, there’s 275 yards of backing on that reel. Let him run!”

“Whirrrr….Whirrrr…Whirrr…” The Pate reel sang a sweet song as the fighting Great Pompano dashed in zig-zags across the channel. Fighting a Permit on the long rods takes all the patience and angling skill a fly rodder can muster. Just when you think you have Mr. Permit whipped, he’s off to the races again!

With an oblong, laterally compressed body, the Permit can exert a tremendous amout of leverage against you, prolonging the length of the fight. Their instinctive runs into deep water will test your fighting acumen, reel drag, and line strength.

“O.K. he’s resting in the channel again, so apply some side pressure while you reel down and pump up on him. If he goes left, apply side pressure to the right and vice-versa. That’s it! He’s within thirty feet of us now. It may feel like he is tuckered out, but don’t give him an inch!”

A hooked Permit will often scrape and bump his mouth against the bottom in an effort to dislodge the fly from his leathery lips. Try to keep the fish off the bottom by applying constant angling pressure and by pumping from different directions. Try the “Reel down and Pump up” technique in rapid succession if the fish tries to rub you off on the bottom. The last thing you want to happen is for the fish to break you off or long-line release your fly. 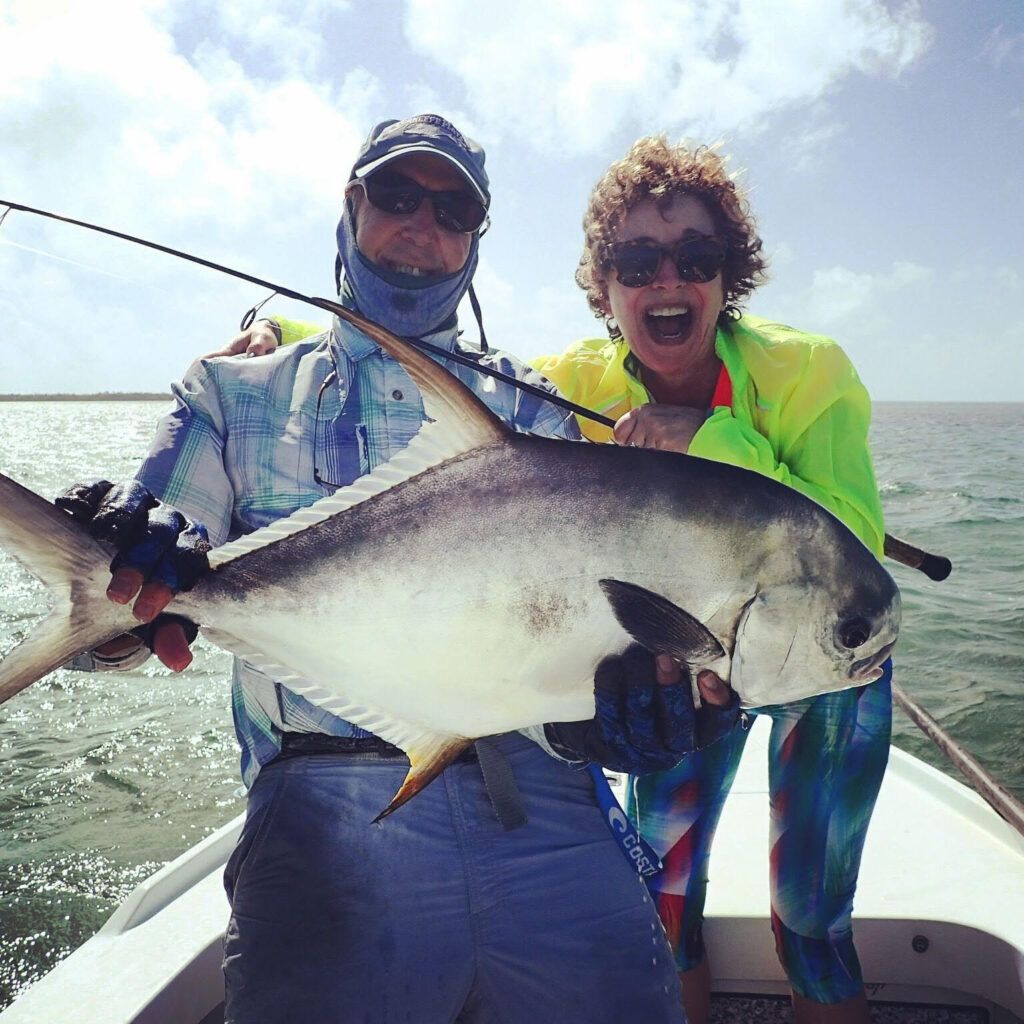 “There he goes! Just a short run, though. He’s been fighting us for twenty minutes now, and his runs are getting shorter and shorter. Keep your rod pressure up so he can’t rub you off! See him digging his mouth on the bottom? See the mud? If he finds a sharp edge in there, it’s over! O.K., good job! He’s back off the bottom again.”

When the Permit is exhausted and ready to be “tailed”, he’ll turn on his side on the water’s edge and he just may allow you to skate him across the surface toward you. Be sure to keep the pressure on him and be ready for one last surprising burst.

“It’s been almost thirty minutes now Dave. That’s a mighty nice fish. Probably close to thirty pounds. Who’s more tired you or the Permit?” Dave was laughing and sweat drenched his shirt as the dazed fish grudgingly flopped next to FlatsMaster. I climbed off the platform and reached down grabbing the Permit by the handle-tail and lifting him up and into Dave’s grasp. “Congratulations guy!”

That priceless “first Permit” look swept over Dave’s face. Like a Dad with his first grandchild, he cradled the fish on FlatsMaster’s bow as pictures were taken and high-fives slapped. We all admired the natural beauty of God’s creation in paradise.

Dave released his first Permit with care, making sure that the fish was fully revived and kicking to be free. He then turned to me and said, “Now I know what you mean when you say “Catch the Memory”. I’ll never forget this for the rest of my life! Thanks Cap!”

We would have preferred to have Ron repeat Dave’s fortune, but that is Permit fishing. After twenty more “quality” shots at tailing and cruising fish that day, we left the Marquesas with grins on our faces. As we motored back to Key West, Dave’s thoughts were again easy to read. “Let’s see, when can I do this again?”